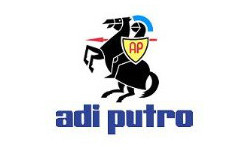 What started off as a small workshop with two mini bus productions turns up to a whole new story.Today AdiPutro has reached something that was considered unthinkable back in 1973. Not many people know that this substantial caroserie business was initiated by a few brothers while they were working at an automotive dealership. The brothers saw the opportunity when a high demand for passenger’s transportation rose in the market at that time. Then they decided to modify pick-up cars into passenger transportation vehicles. Their initial success towards the market demand then motivated them to use all the resources available and started a small caroserie workshop in 1973. Through this small workshop they started producing more mini busses for two years.

In 1975, the official AdiPutro caroserie was established in Malang, where it is still operating until today.From the beginning AdiPutro acknowledged the importance to keep a high quality standard for their customers. Therefore AdiPutro kept on improving new skills in their work as well as adding new machineries. In 1982 AdiPutro invested in machineries known to create a FULL PRESSED BODY quality in caroserie. In 1986 they adopted the OVEN painting system. And in 1989 AdiPutro enlarged the company by establishing a marketing division in Jakarta and soon after that an assembly plant in Bekasi.In 1994 AdiPutro signed a contract with one of the biggest German caroserie companies. This contract opened up a big opportunity for AdiPutro to reach the South East Asia automotive market. Through the same contract, AdiPutro were also able to send their skilled engineers for trainings in Germany. Since then,

AdiPutro had been known for its top of the line quality in caroserie with international recognitions. AdiPutro also received a lot of acknowledgements from large automotive institutions in Indonesia.